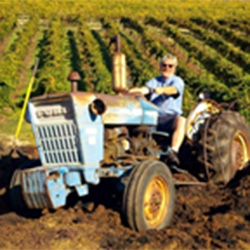 Raised in Lubbock, Texas, Master Winemaker Jon McPherson comes from an extensive winemaking background. His father, ‘Doc’ McPherson was instrumental in the growth of the wine industry in the state of Texas. Jon remembers helping his father plant grapes at Llano Estacado Winery while his mother, Clara, was a professor of Food and Nutrition at Texas Tech.

In 1985, armed with a Bachelor of Science Degree in Food & Technology with a minor in Chemistry from Texas Tech University, McPherson came to Southern California determined to make his mark in the sparkling wine industry. Named winemaker at Culbertson Winery in 1986, McPherson’s leadership and expertise resulted in a record number of medals and catapulted the winery (now known as Thornton Winery) to the distinguished position of “America’s Most Honored Sparkling Wine” producer from the California Wine Winners publication.

Jon McPherson came to South Coast Winery in the Spring 2003 with the opportunity to work with grapes from an amazing vineyard at the base of Mount Palomar called Wild Horse Peak. McPherson also serves as judge for numerous noted national and international wine competitions. McPherson is not only a true craftsman of wine, he enjoys hiking, biking, and is an articulate writer and artist. He has been married to his wife, Anna, for 34 years and is father to his two sons, James and Matthew.