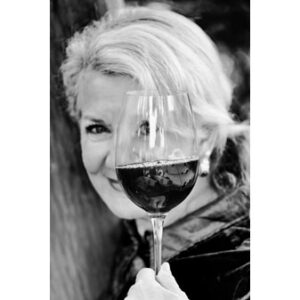 Stacie is a Certified Silver Pin Sommelier, AIS and Co-founder of SPLASH Productions, producers of Wine, Cuisine & Art exhibitions and video documentaries and producing/hosting live streaming shows for wineries and regions.*  As an Emmy-Award winning journalist, she contributes her column to the award-winning online magazine, MY LA Lifestyle and other publications. Additionally, she is an international wine judge and, a taster for Wine & Spirits Magazine.

Stacie serves as Vice President on the board of the National Association of Wine Retailers and is an adjunct professor at Cal Poly and UCLA.  In this capacity Stacie co-created the Certified American Wine Specialist course for the North American Sommelier Association. Her passion is for communicating and encouraging accessibility and knowledge in wine and food.

Because she works in both video and wine, Stacie relates to the quote from Francis Ford Coppola regarding similarities between the wine and film businesses:

“The process is the same, with three stages. In film, you gather the source material. That’s the research or the story material or the writing. The gathering in wine is the gathering of the grapes. The second phase in film is, you take what you’ve gathered, which some days was good, some days was bad, and through the editing you assemble, just as in wine you taste the different lots and then you assemble what you think is the best wine. Then you have the third phase, which is the entire process of finishing, which in film is all the sound and mix and color correction and finally taking it to the audience. In wine, it’s the same thing, the fining and the aging and the bottle aging and ultimately putting it into the package.”

*Along with her work in the wine industry, Stacie is the founder and CEO of Point Media, a digital video production firm specializing in the music industry which develops music videos and multi-cam concert productions. At times her two passions of wine and video production cross over.  Stacie is producer of the one-hour award-winning documentary for Wine Spectator magazine and producer of dozens of Satellite Media Tours featuring wineries.  She is an Emmy and Belding Award winner for her news and journalism work with NBC.  As a product/brand spokesperson she has conducted international webcasts and shows for Bertolli Foods and Saeco and spokesperson for the Baja Winemakers.