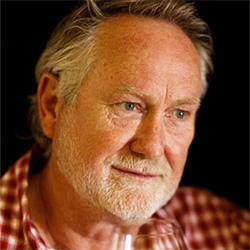 The McPherson’s have been a pioneering family in grape growing and winemaking in Texas for over 50 years.

The family patriarch, Dr. Clinton A. “Doc” McPherson, was one of the “Fathers” of the modern Texas wine industry. In 1976 “Doc,” a Chemistry professor and Bob Reed, a Horticulture professor at Texas Tech University founded Llano Estacado Winery in Lubbock, the first post-Prohibition Texas winery. Until his passing in January, 2014, “Doc” remained one of the state’s prime grape growers and was the first in Texas to plant Sangiovese in his Sagmor Vineyard.

Kim’s mother, Clara, while a professor in Texas Tech’s Department of Food Nutrition Science, established the university’s Hotel Restaurant Management degree program. His younger brother, Jon, has been a winemaker in Temecula near San Diego, CA, for over twenty years and has twice won the prestigious “Golden Bear” award for the most medals won in a single year in CA. Kim graduated from Texas Tech with a degree in Food Nutrition Science and then completed the Enology and Viticulture program at the University of California at Davis. He worked at Trefethen in Napa Valley before returning to Lubbock as winemaker for Llano Estacado from 1979 until 1985 and for Cap*Rock Winery from 1990 until 2007 where he also made McPherson Cellars.

Kim and Jon produced wines together in California under several labels including Il Fratello and Cucamonga Cellars. Kim’s Texas wines have won over 500 medals in state, national and international wine competitions including several Double Gold Medals at the prestigious San Francisco International Wine Competition and numerous Best of Class awards. Kim and “Doc” were inducted into the Who’s Who in Food and Wine in Texas Hall of Fame in 1999 and Kim created the McPherson Cellars label in 2000 to honor his father.

He converted the historic 1930’s era Coca Cola bottling plant in downtown Lubbock into a winery and McPherson Cellars opened in the fall of 2008. It is one of the most beautiful, modern and efficient wine facilities in Texas and one of the most unique wineries in the country. In 2013 Kim was ranked # 20 on a list of the Top 100 Most Influential U.S. Winemakers and McPherson Cellars was # 87 on the Top 101 Wineries for 2014 and moved up to # 83 in 2015. He continues to play an innovative and dynamic role in the development of the Texas wine industry.