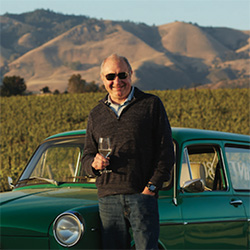 Christian Roguenant was born to make wine. A native of the Burgundy region of France, he grew up surrounded by vineyards. Christian decided early on to become a winemaker, studying enology and winemaking at the University of Dijon. There, he honed his skills early and has since made wine in numerous countries across five continents. He has over 35 vintages under his belt. One of his first experi- ences was two years with Champagne Deutz, one of the premier Champagne houses in France, where he served as a consultant to wineries around the world. His travels brought him to wineries in Argentina, Germany, New Zealand, France and Korea, where he made sparkling wine for the 1988 Olympics. The opportunity to make exceptional wines in San Luis Obispo County led him to the Central Coast in 1986, when Champagne Deutz launched Maison Deutz, a sparkling operation in Arroyo Grande. He started as Winemaker, and later became President when the winery changed ownership and was reamed Laetitia Winery.